This year the School Council have decided to write a child-friendly version of the school prospectus. In our first meeting we looked at the existing prospectus and chose the bits we thought would be most useful/interesting for children to read.

We wanted to make sure that the best things we do here in Knighton CIW Primary would be celebrated, such as our Guardian Angels scheme. Also we think that some grown-ups don’t really understand it properly, which is a big shame!

At our first meeting in February we all chose the the parts of the prospectus we were most interested in. Then we went around school taking lots of photographs.

We hope to get the new prospectus finished by the end of this school year. 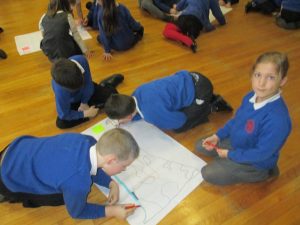